A mysterious YouTube channel claims that at this moment extraordinary extraterrestrial ships extract energy directly from our sun.

This ufology enthusiast has managed to come up with evidence of this shocking statement. He has used the latest images made by NASA’s Solar and Heliospheric Observatory (SOHO).

The UFO hunter said that in those photos taken from NASA he saw a very thin plasma line linking the enormous alien ship to the surface of the sun. This lure is impossible to achieve naturally. 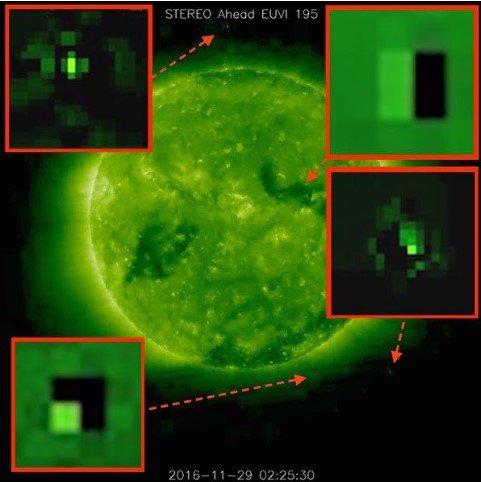 It seems that the unidentified flying object has a different color from the thin plasma line coming from the Sun. That’s why the ufo enthusiast thought about making this discovery public.

At the same time with the discovery of this ufo enthusiast, there have also appeared other people who claim to have detected spacecraft of the size of the Moon or even the Earth near the Sun.

Even a new theory has emerged that aliens use the energy of stars to power the huge spacecraft.

This could only be done by a very advanced civilization. Millions of years more advanced than the human race.

Another theory is that alien ships use stars like our Sun to create portals through which they can travel in all areas of our universe.

This exotic theory assumes that spacecraft have the technology needed to manipulate star energy and create wormholes.

Also, this interesting theory says that those black spots on the sun are really small black holes.

Below you can watch a short video posted on YouTube by the Streetcap1 user:

The followers of this theory have shared opinions. Some of them think these huge ships are unmanned, while others believe that there is still a possibility that these giant ships also have aliens on board, being protected from incredible heat by a very advanced energy shield.

What do you think about this topic?