There are telescopes that are constantly filming the sun. Many of these telescopes have managed to surprise something incredible. This is a mysterious cube that has appeared in many recordings of solar activity. 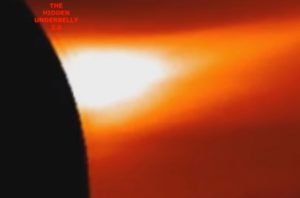 This mysterious cube appeared again this year, and ufologists and independent researchers from around the world have noticed three characteristics of this object.

1. It has the shape of a cube, and this excludes the possibility of plasma being ejected from the Sun.

2. The dimensions of this mysterious cube are extremely large. This observation suggests that this is an advanced alien technology. Not necessarily a spacecraft but a manifestation of extraterrestrial technology that we are not able to understand.

3. The cube appears for short periods of time and then disappears. Many ufologists have speculated that this structure is part of a parallel universe and under certain conditions, due to solar activity, the cube can manifest itself in our reality for a short time.

The views are divided. Many researchers have said that this cube could use the Sun to extract energy, which it later uses as a fuel for space travel.

Watch the full video and see for yourself:

In the strangest and most satisfying moment in the history of television, we can see a